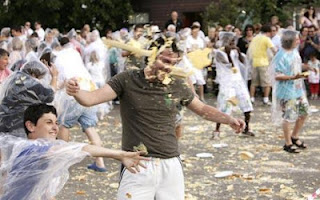 I can exclusively report that, today in the Wilson Room in Portcullis House, Westminster, Christopher Graham was not hit by a custard pie as he gave evidence to the Justice Select Committee of the House of Commons, which held its first evidence session in its inquiry into the EU’s data protection framework proposals.

Actually, it was a pretty good natured event. His wing man, Deputy Commissioner David Smith wasn’t required to protect the Commissioner as Wendi Deng had protected her husband, Rupert Murdoch, back in July 2011. There was no opportunity for “Ninja Smith” to exhibit any of his formidable self defence skills.

There was an opportunity, however, for them both to offer plenty of constructive thoughts on the Commission’s proposals – and the message was that the ICO supported proposals which led to outcomes that promoted good regulation, and good behaviours by data controllers. I was waiting for someone to utter the phrase “selective to be effective”, but today was not the opportunity to hear that one. But there was a considerable emphasis on the point that “prescribing the results is more important than prescribing the forms you need to fill in.” That seemed to go down well with the Committee members.

Those that have a couple of hours free can listen to an audio recording of today’s events here.

We heard a bit of stuff on the right to be forgotten – and the need not to mislead individuals that this “right” was actually giving them rights that they didn’t already have. When particular sound bites are used, it can be so tempting for people to take them literally. The bigger point was to focus on what was consumer friendly and new in the text – like the revised right to object. As we all know, Article 19 reverses the current burden of proof, so if an individual objects to processing, it will be up to the data controller to demonstrate why it is necessary to continue to process the information, not for the individual to prove why the continued processing is so awful.

A new soundbite emerged: “A consistence and equivalence of approach is much better than harmonisation.”

And, there was a renewed emphasis on the need to negotiate the UK’s position in a reasoned, co-operative way, rather than just grandstanding. We’re all diplomats, now.

The showstopper, in terms of evidence, was saved until the last minute. Christopher Graham revealed more details of the compliance cost assessment that his office had carried out, assuming either the least that could possibly be expected of the ICO in terms of carrying out the duties that were to be imposed on his team by the current draft (which would result in a 56% increase in current funding levels), to a more reasoned costing which reflects their “advise & assist” remit, as well as the “enforce & punish” obligation. On this calculation, his funding would need to increase by 187%. And it was evident that there was no thirst to meet such increases in public expenditure.

His message was stark: “You are describing a system that no-one can pay for.”

It was a sombre note to end on. But the Committee was in a sombre mood by that time, too. None had been called by the Prime Minister during the session offering them a job in the newly reshuffled Government.

Sitting, a few moments later in a Parliamentary coffee shop, I spotted a reshuffled MP (no names, that would be rude) receiving some appreciative nods from colleagues – yes, this really was someone who had received the political equivalent of a custard pie today.