Article 29 WP to tweet its latest opinion on the draft Regulation? 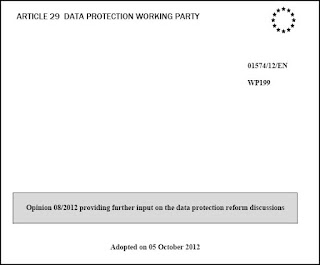 If I were an oik employed by Article 29 Working Party, I might be thinking how I can get more people to read the great stuff that the Working Party churns out. Hardly anyone reads formal opinions these days – we’re all too busy tweeting. So, if I were charged with reviewing all 45 pages of its latest opinion and ordered to translate it from eurobabble into twiterature, this is what a (very) rough draft might look like:

We’ve had yet another meeting to see what we can do to flog a bit of life into this dead horse of a legislative proposal. No one’s that keen on the current law, and we’re all pretty divided on the new proposal, too.

We quite like the concept of a level European playing field. But, half of us think the proposed standards are too high, while the other half are never in a million years going to reduce their current standards – even if a new law tells them to.

Some of us feel quite sorry that small companies are caught up in all the new red tape that’s being proposed – but that’s their own fault for wanting to play around with personal information. Perhaps next time they’ll leave more of this stuff to the big boys.

We’re still not happy with the definition of personal data. There are rumours of at least one American academic who actually understands the proposed definition. So we’ll try to propose some changes to make it less clear.

We’re even less happy about the position on consent. These muppets had better get used to the concept of explicit consent wherever possible. We’ll need to fudge the legitimacy other types of consent, just like we’ve done with the new(ish) cookie law. But not everyone’s going to be clever enough to understand what they are expected to be consenting about. So, we might need to see what we can do on the “legitimate interests” front – until enough innocent (or media savvy) victims complain, that is.

But we’re most unhappy about this ridiculous proposal for the Commission to take on so many new powers to create new laws and data protection standards whenever it wants. They’re an unelected bunch of overlords who aren’t close enough to the plebs. It’s our right to set new data protection standards, as we’re much closer to those who should be ruled. So, if there are any new powers going begging, then we want them.

We’ll offer the Commission a deal – they can have just a couple of new law making powers, if they promise to make some of the important bits of the draft Regulation a bit clearer, and if they also promise to bequeath the majority of the reserved law making powers to us. Take it or leave it. If they’re not happy with the deal, we’ll start a new campaign against the Commission.

They had better make their mind up quick – as if they don’t, we’ll attend every privacy conference we can find over the next year and get all the delegates to wear a badge which express just how we feel.

We’ve even agreed on a campaign logo: “You’re doin’ our head in, Viviane Reding”


Source:
This is a very early draft translation of Opinion 199. The original versions were adopted by the Working Party on 5 October. To be honest, you might be better served by reading the original text yourself, as I did had to leave out quite a few things when squeezing 45 pages into just 450 words. And, as you well know, when you translate stuff from eurobabble into twiterature, the subtlety of some of the meanings are sometimes lost.
http://ec.europa.eu/justice/data-protection/article-29/documentation/opinion-recommendation/files/2012/wp199_en.pdf