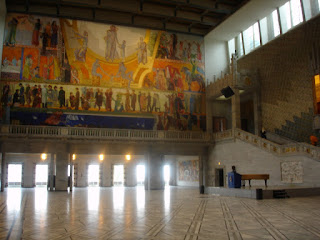 I understand that we in the European Union have all won this year’s Nobel Peace Prize. As there are rather a lot of us, we’re not all going to fit into Oslo’s City Hall for the award ceremony. I expect most of us won’t even get an invite to any of the parties in Norway, either. Never mind.

But, in the (unlikely) event that I am selected to travel to Oslo to receive the prize on behalf of all European citizens, this is an early draft of my acceptance speech:

As a member of the European Union, I wish to thank the Committee for their recent decision to award the 2012 Nobel Peace Prize to me and to my fellow citizens. I humbly accept the compliment on behalf of all Europeans. I will use the publicity and any financial share of the prize to continue to do what I do best – which is to make the case for even high data protection standards to protect our citizens and our economies from the abyss.

I gather that the award also celebrates six decades of advancing peace in Europe – that’s not bad, either. We have to be fortunate that most of the wars we Europeans have recently waged have been in places you wouldn’t really want to call Europe. Like the Falkland Islands, Bosnia, Serbia, Iraq, Afghanistan, or in cyberspace.

But enough of that. Let’s all look on the bright side of life.

We’ve got a shiny bright European Commission, stuffed with lots of clever people who will happily administer our affairs until the cows come home.

And we’ve got a wonderful opportunity to tweak our data protection laws, to make it even harder for non EU data controllers to mess around with the precious digital trails we are all creating.

And wo betide any internet trolls who want to rain on our parade. We have ways and means, you see, of knowing who they are and where they come from. We’re not likely to be able to prevent the data protection taleban from visiting them in the middle of the night to chop off a couple of the fingers they so rudely waved in our direction when we told them how to behave.

That’s how you advance digital democracies in Europe.

A good dose of fear as to the consequences of your actions always concentrates a few minds and encourages compliance.

So, let’s all recommit ourselves to getting tough with those who don’t see much point in maintaining tough data protection standards.


Comments and suggestions for textual improvements should be sent to me at the usual address.

Image credit:
The lucky Europeans eventually selected to receive the prize on behalf of the rest of us will make their acceptance speeches from this podium in Oslo’s City Hall.