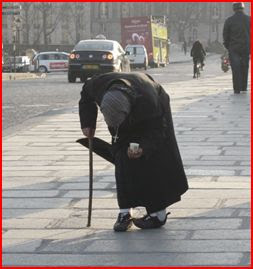 I first heard Kenneth Williams tell this story, which is about an author at a book signing.

The author is approached by an old woman clutching a copy of his book.

He proceeds to write 'To Emma..' but is swiftly interrupted by the agitated women.

Priceless. It’s a reminder to me that I should never take things just as I hear them. Someone else may be giving out an entirely different message.

So what should I take of the recent news that, according to the policeoracle.com website, the Metropolitan Police is, in these economically challenging times, considering ever more cunning ways of making up to £500 million in savings over the next few years, while maintaining key services? It will apparently involve a recruitment freeze (I’m glad I’m not one of the 2,000 candidates waiting for a start date) despite crime fighting remaining a political top priority. But I don’t know whether it will involve the Home Office stepping in to fund services that were previously funded by the Met.

And I imagine that all of the other law enforcement agencies in the UK are facing similar challenges.

Why should I be interested in this subject? Well, as law enforcement budgets are squeezed, I’m wondering how confident communication service providers will remain as they develop their plans to ensure that the communications records that the Home Office may consider are essential for the purposes of crime prevention can actually be retained and, when necessary (and proportionate), be sent to the investigating authorities.

The mighty Regulation of Investigatory Powers Act (RIPA) has a few things to say about cost recovery. Section 24 (Arrangements for payments) provides that “It shall be the duty of the Secretary of State to ensure that such arrangements are in force as he thinks appropriate for requiring or authorising, in such cases as he thinks fit, the making to postal and telecommunications operators of appropriate contributions towards the costs incurred by them ... [and] ... for the purpose of complying with his duty under this section, the Secretary of State may make arrangements for payments to be made out of money provided by Parliament.”

So, the mighty RIPA could be read as enabling the Home Office to make payments directly to service providers to reimburse them for the costs that have been incurred in retaining and disclosing records. Or, it could be interpreted as enabling individual law enforcement agencies to feel obliged reimburse the service providers themselves whenever they asked for some communications records.

If I were the communications data cost centre manager within a law enforcement agency tasked with reducing my overall budget, I’m sure that I would do whatever I could to transfer various costs to someone else – such as the Home Office. Equally, if I were a Home Office cost centre manager tasked with reducing my budget, I might try as hard as I could to get the relevant law enforcement agency meet the costs for communications records, as it was those investigators who required the records in the first place. It seems to me that the time is fast coming for what Caroline Aherne's Mrs Merton would cheerfully term "a heated debate" to be had between all these cost centre managers.

It would be a nightmare scenario if it were to be the case that the Home Office were to decide centrally what records were to be retained, but expect the local law enforcement agencies to pick up the bill themselves. And then to belatedly realise that the local agencies didn't actually have the money. If the local agencies can’t afford the retention costs, then they shouldn’t expect the Home Office to require the providers to keep the records in the first place. He who pays the piper ought to be calling the tune.

And what would I do if I were a communications service provider, stuck in the middle, as it were? I might be tempted to ask the Home Secretary for reassurance that if he wants new ways of retaining and providing communications data to be developed, he’ll underwrite the costs. Or, if he is unable to underwrite all of the costs, perhaps he might be so kind as to explain to the provider what costs he would expect the provider to pay, and what costs ought to be met from the public purse.

Does it matter? Well, in times of economic uncertainty, when service providers are as keen to keep an accurate eye on their finances as are national governments, it would probably help everyone if there existed a level of confidence as to what financial arrangements the Secretary of State may feel to be appropriate in the medium term. I doubt that anyone wants to commit themselves to projects that may require a commitment to spending significant amounts of money over a period of years if there is the possibility that the cost recovery element may be threatened during that period. Not a Government. And probably not a provider.

A little clarity might be useful – but then again I’m sure that the Home Secretary himself would welcome a little clarity as to whether he will be continuing in his current job after the next election.
Posted by Data Protector at 09:50