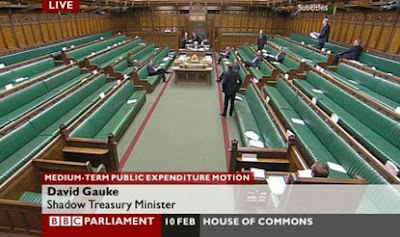 I saw this photograph in yesterday’s London Evening Standard, showing just ten (or eleven) MPs hard at work in the chamber of the House of Commons at 3pm yesterday afternoon. The image captured a minister and his aide, while there were seven Tories, one Liberal Democrat, and possibly another MP chatting to Mr Speaker during the debate on European legislation.

I appreciate that a lot of MPs are “demob happy”, in that they’ll soon be leaving Parliament at the next General Election, but even so I think they ought to make some sort of effort before their absence from parliamentary duties is noticed by the electorate. Surely they ought to try and salvage something from the last few weeks of this session?

They could, for example, try and get a bit more data protection legislation passed.

Some of us remember that back in October, the Ministry of Justice published a consultation paper on the introduction of custodial sentences of a maximum of 2 years for serious Data Protection Act offences. These offences concerned the obtaining, disclosing or procuring the disclosure to another of personal data. The consultation opened on 15 October 2009 and closed on 7 January 2010. The proposals, as set out at the foot of page 13 of the consultation paper, were quite specific as to the timing of their introduction too:

"The ICO is set to receive enhanced powers in early 2010 as a result of provisions contained elsewhere in the Criminal Justice & Immigration Act 2008 and, subject to Parliamentary approval, the Coroners and Justice Bill. Subject to the responses to this consultation, we therefore propose to commence these higher penalties in April 2010 in order to maximise awareness among the public and interested parties of these changes.”

Well, January 2010 has come and gone. And we are well into February. April is not that far away. And have we seen any positive action recently from the chaps in Petty France? And why not? Have their best intentions been thwarted by the parliamentary business managers who are trying to work out what legislation needs to be forced through Parliament before this Government gives up? Surely, when the consultation paper was originally published, even the Government was aware that a General Election was looming sometime in 2010. It’s hard to understand how a popular and deserving initiative like this could have run out of parliamentary time. Unless no-one bothered to think ahead into 2010 back in October 2009.

Was this consultation paper merely an example of political posturing, from a ministry that had no intention of implementing the proposals? Or has their parliamentary time been taken up by others who believe that there are more pressing matters to consider? From the number of politicians who attended the House of Commons yesterday afternoon, evidently a lot have got matters to attend to that are much more pressing than the business that concerns Parliament.

Perhaps a significant number of them have actually forgotten where they left their House of Commons entry pass. After all, they had a 12-week break from Parliament last summer, and are now on an official 11-day half-term break, which comes only a month after they returned from their constituencies. Did they leave it at home on the dining room table? And, if so, in which of their homes?

But all is not quite lost. Hopefully, my faith in human nature, and in the good intentions of Secretary of State Michael Wills and his boss Jack Straw, will be redeemed. One can live in earnest expectation that they will actually deliver what they had planned. We can't be out of time just yet. I don't think I would bet any money on it, though.

Otherwise, let’s see if these proposals turn into manifesto commitments for each of the political parties at the forthcoming general election. Then, their supporters can, eventually, congratulate the new Government on actually fulfilling a promise.

A legislative logjam or another miscalculation by the Parliamentary business managers?

You decide.
Posted by Data Protector at 11:39