Who’s a smarty – who wants to join the Pirate Party? 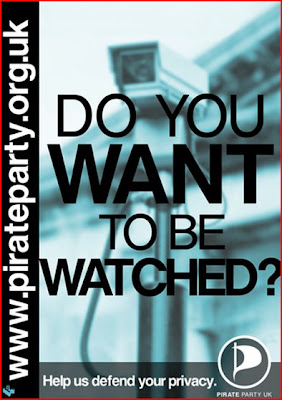 (With apologies to Mel Brooks, who produces puns that are so much better than mine...)

I expect that lots of people would want to join the European pirate movement, but I don’t think that I am one of them just yet. Should they be written off as “an ineffective and short term movement of anarchistic freeloaders”, or is it “an ideological presence that’s here to stay in democratic countries around the world?”

Please, before I get bombarded with complaints about these phrases, let me explain that they were the very words that were used in a recent article by Philip Hunt, the Campaigns Officer for the Pirate Party UK (in the September 2009 edition of the e-commerce law & policy journal). And, for the record, he disagreed with the first description, and supported the second.

I hope they don't mind, but I'm displaying one of their posters from their website on this blog. I don't intend to commit an offence and misuse any of their intellectual property.

What are their main concerns? Well, their website sets them out pretty clearly:

"In recent years we have seen an unprecedented onslaught on the rights of the individual. We are treated like criminals when we share entertainment digitally, even though this is just the modern equivalent of lending a book or a DVD to a friend. We look on helpless as our culture and heritage, so important for binding our society together, is eroded and privatised.

The internet has turned our world into a global village. Ideas can be shared at incredible speed, and at negligible cost. The benefits are plain to see, but as a result, many vested interests are threatened. The old guard works hard to preserve their power and their privilege, so we must work hard for our freedom. The Pirate Party offers an alternative to the last century's struggles between political left and political right. We are open to anyone and everyone who wants to live in a fair and open society.

Following on from the wildfire success of our sister parties in other countries, the Pirate Party UK offers a new way to tackle society's problems, by releasing the potential of ideas, at the expense of corporate monopolies and the interests of a controlling state."

To address these concerns, the Pirate Party UK has three core policies:

• Reform copyright and patent law. We want to legalise non-commercial file sharing and reduce the excessive length of copyright protection, while ensuring that when creative works are sold, it's the artists who benefit, not monopoly rights holders. We want a patent system that doesn't stifle innovation or make life saving drugs so expensive that patients die.

• End the excessive surveillance, profiling, tracking and monitoring of innocent people by Government and big businesses.

• Ensure that everyone has real freedom of speech and real freedom to enjoy and participate in our shared culture.

What do I think about these policies?

I can understand their wish to reform copyright and patent law, as the current law does not seem to work too well in an internet environment. But copyright holders must have some rights too. I find it hard to work out for myself how the balance can be drawn between these competing rights when, thanks to the digital age, it is so easy to create perfect “copies” of property that someone else might rightly claim to own - and make their living from.

I can understand their fear of surveillance, especially if it is used to detect someone who has created a perfect “copy” of something that someone else actually owns. But I don't think that miscreants automatically have a right to hide their tracks by relying on a cloak of anonymity.

And I can understand their wish to embrace free speech – but again so long as it does not impinge on the legitimate rights of others. I sometimes have views that I keep to myself – because I don’t feel it necessary to provoke someone even though all I would wish to express was my own opinion. Others have rights not to be offended too. We still live, in Britain, in a polite society. My bit of Britain, Crouch End, is populated by people who try to behave more like Caroline Aherne's "Mrs Merton" than Catherine Tate's "Nan".

So, I will be looking out for the candidates from the Pirate Party UK as they begin to participate in mainstream British politics. I hope that their views will provoke some very interesting debates. And, as elections to the devolved assemblies in Scotland, Northern Ireland and Wales are run under a system of proportional representation, they might even win a seat or two in 2011.
Posted by Data Protector at 10:46