Article 29 WP "tweets" its Opinion on the FEDMA Code 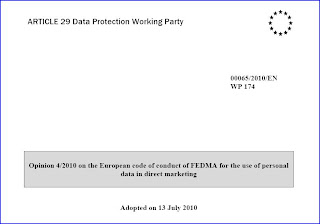 "Zut alors! –we’ve been asked for an opinion about an Annex to a European Direct Marketing Code.

As they asked us nicely to look at it back in December 2005, we’ve pulled out all the stops and it’s taken us less than 5 years to agree what to say.

Yep, it looks like it's legal, as it’s what the DP Directive says. Oh, and it’s quite detailed and it’s 15 pages long. So our opinion had better be almost half as long as the Code itself.

Whoopee! We’ve got a new Directive coming into force soon which mentions cookies and spyware. So FEDMA might have to take their Code back and tinker with it again.

For the data protection professionals who need a little more substance about the Opinion and the Annex to the code, the Article 29 Working Party’s full Opinion [4/2010], adopted on 13 July 2010, on the European code of conduct of FEDMA for the use of personal data in direct marketing can be found at http://ec.europa.eu/justice_home/fsj/privacy/docs/wpdocs/2010/wp174_en.pdf

The Annex to the FEDMA code itself is found at http://ec.europa.eu/justice_home/fsj/privacy/docs/wpdocs/2010/wp174_annex_en.pdf
Posted by Data Protector at 13:34