Who should watch over the watchers? 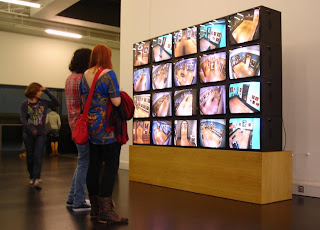 A thought occurred to me last night as I wandered through an excellent exhibition at the Tate Modern. “Exposed: Voyerism, Surveillance and the Camera” contains a series of pictures taken by professional models and artists, but also images made without the subject’s knowledge.

You can imagine the types of images that are presented in the various sections of the exhibition, which are divided into five themes: the unseen photographer; celebrity & the public gaze, voyeurism & desire; witnessing violence; and surveillance. Some of the images are quite funny – the artist Degas is pictured leaving a public pissoir in Paris. Marylyn Monroe is above the hot air vent. Kim Novak dines alone in a railway restaurant car, with every other man in the shot watching her. Some are quite shocking – particularly the results of the lynch mobs in the Southern States of America, and the remains of the victims caught up in genocide in Africa. While a few are unsettling for entirely different reasons – the British Army’s watchtowers in Northern Ireland, or the huge middle eastern town that the US military has built in an America desert, to prepare their troops for what will face them when they are deployed in Iraq or Afghanistan, look entirely out of place with their contemporary surroundings.

I took this image just past the exit of the exhibition – the thought of discretely creating an image of people who had just attended the surveillance exhibition stopping to watch banks of CCTC cameras monitoring what was going on in some of the galleries in Tate Britain Gallery, just down the river, was too tempting (and ironic) to pass up. At that timein the evening, the Tate Britain was closed, but one of the museum’s cats was wandering around the galleries, and it was lovely to see this animal appear in the monitors as it continued on its nightly pussy patrol. The artist who installed this exhibit cleverly realised that the fun we get from monitoring the actions of this cat were sure to be similar to the voyeuristic pleasures that the photographers must have had.

Anyway, back to the plot. Who should watch over the watchers? In the UK, we have the mighty RIPA (Regulation of Investigatory Powers Act) which has created a supervisory structure for surveillance, which is headed by two Commissioners – the Surveillance Commissioner and the Interception of Communications Commissioner, both of whom are appointed by the Prime Minister and report directly to him.

Despite the fact that both Commissioners (and their staff) are utterly honourable people, some might argue that their independence could be compromised as they are not seen to be as independent as they might be. After all, they are appointed by the Prime Minister, it is he to whom their annual reports are presented, and it is the Home Office who sets they were to be appointed by Parliament, and their budgets were to be set by Parliament, instead?

This is the same argument I’ve recently heard when the Information Commissioner has argued that he must be seen to be more independent, and that rather than his office being “administered” by the Ministry of Justice, it would be more appropriate if he (and it) were to deal directly with a Parliamentary Committee.

Let’s see what happens. But what’s good for the goose is obviously good for the gander – so if the Information Commissioner manages to loosen his ties from the Ministry of Justice, so that he becomes more firmly wedded to direct Parliamentary scrutiny, then I would expect not too discrete pleadings being made on behalf of the other Commissioners, too.

It’s a cunning way of transferring just a tiny bit of power from the Executive to the Legislative.
Posted by Data Protector at 03:56