Exclusive: An easy way to comply with the cookie regulations 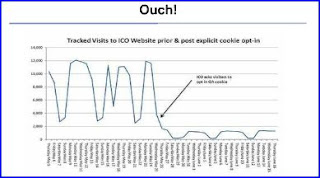 I can finally reveal an easy way to comply with the cookie regulations. Even the Article 29 Working Party is going to be impressed. It could make it's creator – me – a multi millionaire if a significant number of people take it up, and they then start following other pieces of wisdom that occasionally get trotted out in this popular blog.

None of us really want our stats about visitors to our web sites to fall off a cliff – as is evidenced by what happened when the Information Commissioner’s Office unveiled its cunning plan to simultaneously comply with the ePrivacy Directive and remain forever ignorant about what its website visitors actually do when they go to www.ico.gov.uk. The result - pictured - is too horrific even to smile about.

There has to be a better way of web masters behaving like lemmings. So, rather than force customers to make a choice (which they most likely won’t do as they simply don’t understand the implications of the words that are put in front of them) before they’ve had an opportunity to know whether the web site is any good or not and whether they’ll ever want to come back, I’ve had a better idea.

I appreciate that this idea will have financial implications for the huge industry of cookie advisers that has developed over the past few years. Some of the fees I’ve heard being charged for people to receive advice from data protection professionals are so good that I want to get in on the act, too. My advice might not be delivered in as deadpan a manner as some of my learned friends, but at least it will put a smile on people’s faces.

After much research, I’ve concluded that the real problem surrounding cookies is that, for the most part, internet users can’t be bothered to do anything about them. The philosophers may ask if this is because people really don’t care about cookies, or whether people don’t know what harm may be caused to them by someone who places abusive cookies on their devices.

The answer is simple. It lies in a public awareness campaign, and in getting the general public to start asking the questions for themselves, rather than having advice screamed at them from above. It worked with public awareness about the menace of HIV and AIDS. As soon as an Eastenders character found they were living with it, public attitudes changed very quickly – and very much for the better.

And the answer also lies in making such education fun – and healthy.

So my cunning plan – wait for it – is to seek funding from the European Commission to sponsor an internationally televised competition. Students, youth groups, in fact any teams of friends or work colleagues, are to compete in a song and dance contest. Teams wishing to audition should get their first efforts loaded onto YouTube by 26 May 2012, as it is from this date that the Information Commissioner has announced that he could start to do something more about cookie compliance in 'Blighty.

One catch – I get to specify the song.

And my selection, thanks to the inspiration from Little Nell, Richard O'Brien,and Patricia Quinn, is about worshiping active recorded preferences about cookies.

This may not sound that catchy a title, until you shorten it to the Cookie Warp.

Here are the words. You all know the tune, now come up with the dance!

It's astounding, time is fleeting
Madness takes its toll
But listen closely, May’s not that much longer
You've got to take more control

Just set your cursor to the left
And then you set it to the right
With your hands on your mouse
You bring your digits in tight
But it's not getting good content that really drives you insane,
Let's do the Cookie Warp again!

The Commission’s so dreamy, so fantasy free me
Now you can't see me, no not at all
I’m in another dimension, with voyeuristic intention
I’ve paid my entrance fee, now I want to experience it all

I’ve seen some sites that are unsavoury
But you must forget my knavery
I’ve got rights (and stuff that I don’t want you to know)
You're keeping too much browsing history (that should really stay a mystery)
Let's do the Cookie Warp again!

Well I was surfing down a site just a-having a think
When this snake of an add man gave me an evil wink
He really shook me up, he took me by surprise
He had my browsing life at hand, I saw the devil in his eyes.
He stared at me and I felt I must change
I’ll put an end to this: my preferences I’ll rearrange
Let's do the Cookie Warp again!

Note:
Spookily, the Rocky Horror Show was being developed, back in 1973, at around the same time that data protection was starting to be taken seriously in Parliaments around Europe.


Further note:
If our chums from DG Justice at the European Commission, or from the Information Commissioner's Office, post their entry onto YouTube by 26 May 2012, then I'll happily donate £100 to the Help for Heroes charity, in their honour.