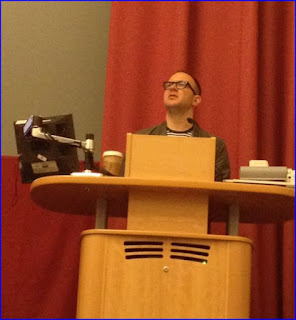 This weekend I'm preparing a series of remarks that I'll be making at the ICO’s conference on the future of data protection, to be held in Central London later in the week. Don’t worry if you haven’t heard about it – I gather that such was the anticipated interest, and the predicted subsequent disappointment when it was realised that not every applicant could attend, that it has turned into an invitation-only event. I’ll blog about the best bits later.

Cory was speaking (using reams of carefully honed phrases) on the war on general purpose computing. I'll be speaking on data breach management. But we could well be using the same language to make same the points in our presentations. Spooky.

And what phrases may I be gratefully be rehashing?

Eyes down for catch phrase bingo:

“As they say on aircraft carriers, Mission Accomplished.”

“The triviality of this issue is revealed when we appreciate the significance of the real issues that face us today. [Such as the economy, education and public health.] This is not a war, this is barely a skirmish.”

Other speakers such as Wendy Seltzer also used cool phrases. Wendy is a Fellow at Yale Law School, on the board of directors of the TOR project. She quoted US Senator Ron Wyden, referring to the draft Combating Online Infringement and Counterfeits Act:"It seems to me that online copyright infringement is a legitimate problem, but it seems to me that COICA as written is the wrong medicine. Deploying this statute to combat online copyright infringement seems almost like using a bunker-busting cluster bomb when what you really need is a precision-guided missile."

Professor Ross Anderson, from the University of Cambridge Computer Laboratory, also came up with a great quote, fearing the consequences of a data breach involving large databases containing people’s sensitive medical details: “When the moral entrepreneurs get going it will be like Alder Hay on steroids.” Interestingly, he’s just published some great stuff on anonymisation. So the ICO won’t have that much research to do when prepares its own Code of Practice on the same subject.

I won’t identify the speaker who opined about “an Office deliberately created to be toothless back in the 1980s.” Nor will I identify the Office. But I am looking forward to doing my bit for the ICO later in the week.

Is it necessary just to in clichés? Probably not, but why waste time reinventing the wheel?

Feel free to count them as I use them later in the week. And, if I get to use them all, I'll give a nod to the person who shouts "Data Protection Bingo" first!